Activation of the Wnt/β-catenin and hepatocyte growth factor/Met signaling has been implicated in various tumors. Owing to the cross-talk between these pathways and aberrant redistribution of β-catenin in hepatoblastomas, we examined their status in this tumor. This study examined changes in β-catenin and Met in paired pretreatment and post-treatment hepatoblastoma tissues in relation to their effects on proliferation and target genes such as c-myc and cyclin-D1. In this study we compared proliferation indices, β-catenin staining and its known molecular targets, c-myc and cyclin-D1, and Met, a tyrosine kinase receptor for hepatocyte growth factor in pretreatment and post-treatment specimens. Pretreatment and post-treatment sections from 13 children, ages 11 weeks to 9 years, were analyzed for these markers by immunohistochemistry. All tumors (13 of 13) displayed increased proliferation and β-catenin (cytoplasmic and nuclear) staining in pretreatment biopsies that remained relatively unaffected after treatment. Aberrant Met staining (cytoplasmic) was observed in all pretreatment samples that decreased considerably after treatment in 11 of 13 patients. A significant subset of these tumors showed increased c-myc and cyclin-D1 staining in pretreatment biopsies that decreased after chemotherapy in most cases. β-Catenin redistribution in tumor cells corresponds to proliferation in hepatoblastomas. However, β-catenin nuclear localization remains unaffected in viable hepatoblastoma tissue after chemotherapy. In contrast, Met undergoes a prominent decrease after treatment and thus might be important in pathogenesis of hepatoblastoma. 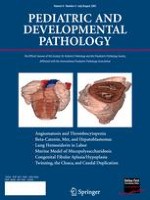 Three-Dimensional Reconstruction and Morphologic Measurements of Human Embryonic Hearts: A New Diagnostic and Quantitative Method Applicable to Fetuses Younger Than 13 Weeks of Gestation