Glucagon-like peptide type 1 (GLP-1) is an incretin peptide that augments glucose-stimulated insulin release following oral consumption of nutrients. Its message is transmitted via a G protein-coupled receptor called GLP-1R, which is colocalized with pancreatic β-cells. The GLP-1 system is responsible for enhancing insulin release, inhibiting glucagon production, inhibiting hepatic gluconeogenesis, inhibiting gastric mobility, and suppression of appetite. The abundance of GLP-1R in pancreatic β-cells in insulinoma, a cancer of the pancreas, and the activity of GLP-1 in the cardiovascular system have made GLP-1R a target for molecular imaging.

We prepared 18F radioligands for GLP-1R by the reaction of [18F]FBEM, a maleimide prosthetic group, with [Cys0] and [Cys40] analogs of exendin-4. The binding affinity, cellular uptake and internalization, in vitro stability, and uptake and specificity of uptake of the resulting compounds were determined in an INS-1 xenograft model in nude mice. 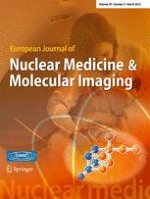