A systematic review was undertaken to assess the technology used to create stereovision for human perception. Adverse effects associated with artificial stereoscopic technology were reviewed with an emphasis on the impact of surgical performance in the operating room. MEDLINE/PubMed library databases were used to identify literature published up to Aug 2017. In the past 60 years, four major types of technologies have been used for reconstructing stereo images: anaglyph, polarization, active shutter, and autostereoscopy. As none of them can perfectly duplicate our natural stereoperception, user exposure to this artificial environment for a period of time can lead to a series of psychophysiological responses including nausea, dizziness, and others. The exact mechanism underlying these symptoms is not clear. Neurophysiologic evidences suggest that the visuo-vestibular pathway plays a vital role in coupling unnatural visual inputs to autonomic neural responses. When stereoscopic technology was used in surgical environments, controversial results were reported. Although recent advances in stereoscopy are promising, no definitive evidence has yet been presented to support that stereoscopes can enhance surgical performance in image-guided surgery. Stereoscopic technology has been rapidly introduced to healthcare. Adverse effects to human operators caused by immature technology seem inevitable. The impact on surgeons working with this visualization system needs to be explored and its safety and feasibility need to be addressed. 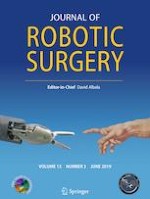 An introductory curriculum for residents on transoral robotic surgery

Microanalysis of video from a robotic surgical procedure: implications for observational learning in the robotic environment