Major limitations of conventional laparoscopy are lack of depth perception and tactile feedback. Introduction of robotic technology, which employs 3D imaging, has removed only one of these technical obstacles. Despite the significant advantages claimed, 3D systems have not been widely accepted.

In this single institutional study, 20 patients undergoing LLR by high-definition 3D laparoscope between April 2014 and August 2014 were matched to a retrospective control group of patients who underwent LLR by two-dimensional (2D) laparoscope. 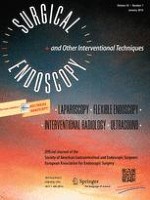 The Hit and Away technique: optimal usage of the ultrasonic scalpel in laparoscopic gastrectomy

A blinded assessment of video quality in wearable technology for telementoring in open surgery: the Google Glass experience