40 patients were randomized to tafluprost 0.0015% (20 patients; 32 eyes) or latanoprost 0.005% + benzalkonium chloride 0.02% (20 patients; 35 eyes) once daily for 1 year. Inclusion criteria were new glaucoma diagnosis, and no ocular treatments for 6 months before the study. Patients were evaluated at baseline and every 3 months with a complete ophthalmologic evaluation, Schirmer’s test, break-up time test, confocal microscopy of the central cornea, and measurement of intraocular pressure (IOP). Investigators were masked to treatment. Both eyes were analyzed if they fulfilled inclusion criteria. Treatments and changes between follow-up and baseline were compared by analysis of variance (ANOVA), t test and Chi-square test.

At baseline, the two groups had similar age, ocular surface and confocal findings; keratocyte activation was present in 40%, branching pattern in 85%, and beading in 75%, with no inter-group differences. At follow-up, no significant clinical changes were detected, apart from a drop of IOP by 3.6–4.2 mmHg in the two groups (p < 0.001, with no difference between treatments). Despite inter-treatment ANOVA for confocal microscopy being negative, subtle changes were present. During follow-up, all eyes without nerve branching pattern at baseline progressively developed it when treated with latanoprost, whereas no change occurred using tafluprost treatment (p = 0.05). None of the eyes without beading at baseline developed it at the end of the study in the tafluprost group, whereas beading did occur in 75% of patients treated with latanoprost (p = 0.05). Both treatments were associated with increased keratocyte activation at follow-up; the change from baseline was statistically significant after month 3 with latanoprost (p = 0.02) and after month 6 with tafluprost (p = 0.04).

The two study treatments had similar clinical effects, but tafluprost had a more favorable profile for some confocal parameters of the cornea. 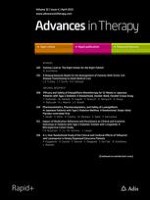 Impact of Medication Adherence and Persistence on Clinical and Economic Outcomes in Patients with Type 2 Diabetes Treated with Liraglutide: A Retrospective Cohort Study

Asthma Control: The Right Inhaler for the Right Patient

Does Defibrotide Induce a Delay to Polymorphonuclear Neutrophil Engraftment After Hematopoietic Stem Cell Transplantation? Observation in a Pediatric Population