Though rare, there are documented failures of femoral prosthesis due to corrosion of the head–neck interface in total hip arthroplasty (THA), a phenomenon known as trunnionosis. This wear can result in metallosis, whereby metal debris scatters the surrounding soft tissues. We present on a 58-year-old female who presented with increase in hip and back pain 10 years following right THA using a metal-on-polyethylene construct with a large femoral head (44 mm). Aspiration withdrew metallic fluid, and intraoperative findings showed corrosion of the head–neck taper with surrounding metallosis and pseudocapsule formation. Despite advances in THA design, corrosion and wear between components still exists and may be cause for failure. We present on both the subtle clinical findings and the recommended workup when suspicion is high for trunnionosis, metallosis, or wear, ideally with identification prior to catastrophic failure such as component dislocation or fracture as previously reported. 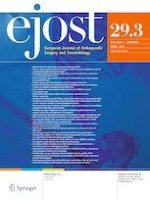 Combining nerve and tendon transfers in tetraplegia: a proposal of a new surgical strategy based on literature review