A case of mucinous borderline ovarian tumor with microinvasion that relapsed, with an adverse prognosis | springermedizin.de Skip to main content
TOOLBAR 1 2 3 4
SUCHE MENÜ 1 2 3 4

The nomenclature and diagnostic criteria of mucinous borderline ovarian tumors (M-BOTs) are controversial. We report a case of M-BOT with microinvasion that relapsed, with an unfavorable outcome. A 40-year-old Japanese female underwent emergent laparotomy (left salpingo-oophorectomy) for a ruptured ovarian cystic tumor. The pathological diagnosis was M-BOT of the left ovary with microinvasion. She was followed up without additional therapy in accordance with her request, and 9 months after initial surgery the same tumor relapsed in the right ovary. She was surgically treated and followed up in the same manor as before. A second relapse occurred 25 months after the initial surgery; exploratory laparotomy revealed peritoneal dissemination. Biopsy confirmed diagnosis of mucinous adenocarcinoma. Although she received three biweekly cycles of a modified FOLFOX 6 regimen (oxaliplatin in combination with infusional 5-fluorouracil/leucovorin) after surgery, she died of the disease 28 months after the initial surgery. Although the diagnostic criteria for M-BOT are debatable, cases of M-BOT with microinvasion may sometimes have adverse prognoses, as in this case. 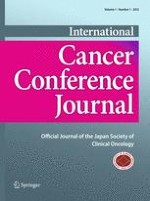