The emergence of minimally invasive thoracic surgery has positively impacted postoperative recovery. Robotic-assisted thoracoscopic surgery (RATS) has been shown to have equivalent short- and long-term outcomes as compared with video-assisted thoracoscopic surgery (VATS). The introduction of RATS offers a three-dimensional high-definition image, improved ergonomics, and wristed movement. The purpose of this paper was to define the learning curve of RATS.

This study is a retrospective review of a single surgeon’s RATS experience in a community hospital. All patients who underwent RATS between December 2011 and April 2014 were included. The cohort was divided into 2 groups: “early” and “late.” These groups were created based on the date before or after February 2013, respectively. Data is presented as means and percentages. Significance was defined as a P value < 0.05. All categorical variables were evaluated with Fisher’s exact t test and all continuous variables were compared via a paired t test.

Based on our experience, the complexity of the operations that can be performed robotically increased with the number of operations performed without an impact on postoperative morbidity and mortality. 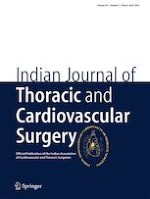 Type A acute aortic dissection repair during night time: is it safe?

Stephen Westaby: The Knife’s Edge: The Heart and Mind of a Cardiac Surgeon