The objectives of this study were to study the clinical and biochemical profile of neonates with sepsis and to evaluate the diagnostic role of presepsin and its comparison with C-reactive protein (CRP) and Procalcitonin (PCT). This study was conducted from March 2015 through October 2016 in Neonatal intensive care unit (NICU) at S N Medical College, Agra. Neonates with ≥1 clinical features of sepsis and/or two risk factors were included. A total of 41 cases and 41 controls were taken. Blood sample was taken for all investigations. ROC curve analysis was performed. Out of 41 cases, 19 were blood culture positive, majority were males (68.3%), low birth weight (LBW: 70.7%) and preterms (53.6%). At chosen cut-off values, sensitivity of CRP, PCT and presepsin was 80.5%, 80.5%, 97.6% and specificity was 97.5%, 80.5%, 95.1% respectively. PCT and CRP were comparable as diagnostic markers of neonatal sepsis. Presepsin, in comparison with CRP and PCT has better sensitivity and negative predictive value (NPV). 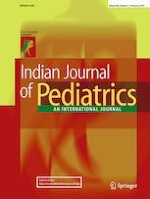 Treatment of Neuroblastoma with a Novel Delayed Intensification Chemotherapy