Plate fixation, the conventional treatment for traumatic symphysis pubis diastasis, carries the risk of extensive exposure, blood loss and postoperative infections. Percutaneous screw fixation is a minimally invasive treatment. The goal of the present study was to compare the outcome of plate fixation and percutaneous screw technique in the treatment of traumatic pubic symphysis diastasis.

Our results indicate that besides lower rate of iatrogenic injuries and better functional outcome, percutaneous screw fixation of the pubic symphysis is as strong as plate fixation. 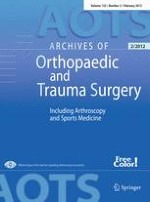 Cause of infection in proximal tibial endoprosthetic reconstructions

Letter to the article of Jiang et al.