To evaluate serum levels of IL6 in patients with Kawasaki disease and compare it with CRP, and to assess the role of these biomarkers in predicting coronary changes and resistance to the first-line therapy of this disease in a subset of Indian population. A single centre prospective observational study was conducted amongst all Kawasaki disease patients for a period of 18 months from January 2017 at Institute of Child Health, Kolkata. Serum IL6 and CRP were compared at diagnosis and after 48 h of administering IVIG in patients who developed coronary changes with those who did not and also among the responders and non-responders to IVIG, the first-line therapy given to these patients. Out of total 72 patients of KD [mean age of presentation: 24 months, M:F = 1.22:1], 30% (n = 22) had coronary artery involvement (CALs), and 15% (n = 11) were IVIG non-responders. Mean IL6 prior to IVIG in those with CALs was 143.60 pg/ml, which was about three times higher than in those without CALs (mean = 52.90 pg/ml), the difference being significant (p < 0.01). Mean CRP values also were significantly raised in patients with CALs (p < 0.01) whereas post-IVIG levels of mean serum IL6 was found to be 108.15 pg/ml in non-responders which was about 17 times raised than that in the responders (mean IL6 = 6.22),the difference again was statistically significant (p < 0.001).Also, ROC analysis revealed a sensitivity and specificity of 81.0% and 82.0%, respectively, for IL6; 72% and 74%, respectively, for CRP for predicting CALs. This study also shows a sensitivity of 72% and specificity of 68% for IL6 in predicting IVIG resistance whereas that of CRP being 90% sensitive and 36% specific. These results suggest that higher levels of IL-6 and CRP at diagnosis are associated with occurrence of CALs and IVIG resistance in KD patients. Using the cutoff for IL6 and CRP from our study, chances of developing CALs and IVIG resistance can be predicted, which might prevent the development of future complications like aneurysms in such patients. 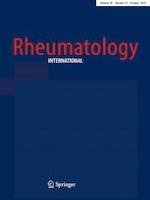 Health-care utilisation for low back pain: a systematic review and meta-analysis of population-based observational studies

Prevalence of other connective tissue diseases in idiopathic inflammatory myopathies