The thrombin inhibitor dabigatran is administered as the prodrug dabigatran etexilate, which is a substrate of esterases and P-glycoprotein (P-gp). Dabigatran is eliminated via renal excretion but is also a substrate of uridine 5ʹ-diphospho (UDP)-glucuronosyltransferases (UGTs). The objective of this study was to build a physiologically based pharmacokinetic (PBPK) model comprising dabigatran etexilate, dabigatran, and dabigatran 1-O-acylglucuronide to describe the pharmacokinetics in healthy adults and renally impaired patients mechanistically.

A PBPK model of dabigatran was successfully developed. The predicted area under the plasma concentration–time curve, trough concentration, and half-life values of the assessed clinical studies satisfied the two-fold acceptance criterion. Metabolic clearances of dabigatran etexilate and dabigatran were implemented using data on carboxylesterase 1/2 enzymes and UGT subtype 2B15. In severe renal impairment, the UGT2B15 metabolism and the P-gp transport in the model were reduced to 67% and 65% of the rates in healthy adults.

This is the first implementation of a PBPK model for dabigatran to distinguish between the prodrug, active moiety, and main active metabolite. Following adjustment of the UGT2B15 metabolism and P-gp transport rates, the PBPK model accurately predicts the pharmacokinetics in renally impaired patients. 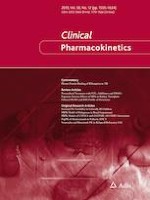