Rapid ventricular pacing (RVP) is used during transcatheter aortic valve implantation (TAVI). RVP disturbs myocardial oxygen balance, and when prolonged, it may cause procedure-related myocardial injury (PMI). This study investigated whether a longer duration of RVP increased the occurrence of PMI or worsened long-term mortality after TAVI. We retrospectively analyzed data from 188 patients who underwent TAVI in our institute from January 2013 to July 2015. Myocardial injury was represented by the peak value of creatine kinase-myocardial band (CK-MB) within 72 h after the procedure; an increase greater than 5 times the upper reference limit was regarded as PMI. There was no difference in RVP time (RVPT) between patients with and without PMI (median [range]: 57 [9–189] s vs. 54 [0–159] s, p = 0.9). A higher peak CK-MB was significantly correlated with the apical approach for the procedure (p < 0.001) but not with total RVPT (p = 0.22). A subanalysis of 133 patients whose troponin I was tested within 72 h postprocedurally showed no correlation between the peak value and RVPT (p = 0.40). Shortening RVPT did not result in myocardial protection; thus, RVPT during TAVI should be sufficient to optimize valve placement. 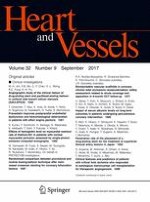