This study aimed to determine the long-term surgical outcome of pharmacoresistant epilepsy caused by focal cortical dysplasia (FCD) and to identify the important predictors of the favorable surgical outcome. The study retrospectively analyzed the data of pharmacoresistant epilepsy patients with histologically proven FCD in our epilepsy center from May 2010 to December 2014. It included 120 patients with a mean follow-up of 34.6 months. Survival analysis and multivariate regression with Cox proportional hazards model were used to evaluate the rate, stability, and predictors of seizure freedom. The estimated chance of seizure freedom was 73.0 % [95 % confidence intervals (CI), 65.2–80.8 %] at 1 year after surgery, 70.0 % (95 % CI, 62.2–77.8 %) at 2 years, and 65 % (95 % CI, 53.2–76.7 %) at 5 years and beyond. Most seizure recurrences (85.7 %) happened within 12 months after surgery. The incomplete resection of FCD, presence of interictal epileptiform discharges (IEDs) on 3–6 months postoperative electroencephalography (EEG), and presence of habitual acute postoperative seizure (APOS) were independent predictors of seizure recurrence. However, other factors, such as the FCD type and sleep-related epilepsy, did not significantly influence the surgical outcome. Before becoming pharmacoresistant epilepsy, 30 (25 %) patients responded to antiepileptic drugs with a seizure-free duration of more than 1 year. The surgical outcome is favorable in patients with FCD, which is comparable to that reported in developed countries. The incomplete resection of FCD, presence of IEDs on 3–6 months postoperative EEG, and presence of habitual APOS are powerful predictive factors for seizure recurrence after surgery. 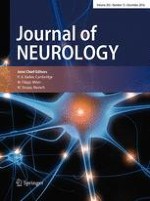 Familial paraganglioma syndrome: a rare cause of carotid artery occlusion

Immunoadsorption or plasma exchange in the treatment of autoimmune encephalitis: a pilot study