The surgical Apgar score (SAS) has been a useful predictor of postoperative complications in several types of cancer. However, there are few reports about the correlation of SAS and esophageal cancer. This study aimed to examine the utility of SAS as a predictor of major complications, particularly anastomotic leakage, in patients who underwent transthoracic esophagectomy, and investigate the correlation between SAS and patient prognosis.

This is a single-center, retrospective observational study. A total of 190 patients who underwent esophagectomy for esophageal cancer in 2012–2016 were reviewed to find the correlation between SAS and postoperative complications (Clavien–Dindo classification III or higher). SAS was calculated based on intraoperative estimated blood loss, lowest mean arterial pressure, and lowest heart rate. Major complications included anastomotic leakage, respiratory, cardiac, recurrent nerve palsy, chylothorax, and other complications. We also reviewed how SAS was correlated with 3 year overall survival (OS) and recurrence-free survival (RFS). A high SAS was defined as ≥ 6, and a low SAS as < 6.

On univariate analysis, SAS showed a statistical significance in all major complications and anastomotic leakage. On multiple logistic regression analysis, a low SAS was detected as a risk factor of the major complications and anastomotic leakage, with a significant difference. Moreover, we conducted survival analysis with SAS; however, we could not detect that a low SAS had a negative impact on OS and RFS.

A low SAS can be a predictor of postoperative complications, especially anastomotic leakage. However, SAS was not correlated with OS or RFS. 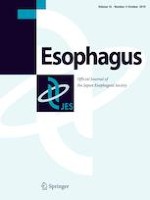 Changes in the nutritional status of elderly patients after esophagectomy