We evaluated the effectiveness of an early POI in newly diagnosed cancer patients in reducing the occurrence of psychiatric disturbances.

We designed a mono-institutional prospective study involving all new patients admitted to the Oncology Department of Fatebenefratelli and Ophtalmic Hospital in Milan from January 2005 until September 2008. During the first visit, the oncologist could offer support with a psycho-oncologist. The patients who accepted had a first interview (T0), during which they took a self-evaluation test (HADS, Hospital Anxiety and Depression scale). On the basis of the score, the psycho-oncologist could offer psychotherapy and/or pharmacological intervention, if necessary. At the end of the eight sessions (T1), the patient repeated the self-evaluation test with the HADS, and we analysed both the difference in the HADS score between T0 and T1 and the clinical evaluation of the psycho-oncologist.

Three hundred eighteen patients were evaluated with a psychoanalytical psychotherapy approach by two psycho-oncologists through a first interview and 90 of them were eligible for the present study also for the evaluation of HADS. The average HADS score in T0 was 15.26 for depression (sd=3.21) and 13.86 for anxiety (sd = 2.05). The reassessment at the end of the psychotherapy (T1) showed an average HADS score of 5.94 for depression (sd = 3.11) and 6.58 for anxiety (sd = 2.88). Only five patients were treated with a pharmacological approach alone.

Considering all the limits of our study, we may conclude that an early POI significantly reduces patients' psychiatric symptoms and the risk of a negative evolution of pathological situations in those patients who are motivated and express a need for psychological help. 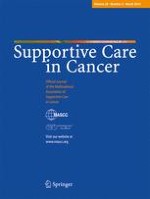 Gabapentin for the prevention of chemotherapy- induced nausea and vomiting: a pilot study