From January 2007 to January 2016, patients in their 20s and 30s who were diagnosed with primary gastric cancer at 4 hospitals were enrolled. Their clinical characteristics and prognosis were evaluated. 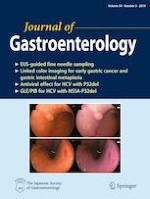 Response to the letter by Sumida et al. regarding our manuscript “Evaluation of ballooned hepatocytes as a risk factor for future progression of fibrosis in patients with non-alcoholic fatty liver disease”