To evaluate the effect of remote ischemic conditioning (RIC) on ovarian ischemia/reperfusion injury in a rat model.

A total of 36 Wistar albino rats with a body weight of 220–250 g were used for this study. Right adnexal torsion was performed for 180 min, and at the end of the period, the adnex was released and the abdomen was reclosed for 180 min for reperfusion. Torsion and detorsion procedures were applied to all rats except group 1 (sham, control). The right lower extremity was tied to perform remote tissue ischemia in groups 3, 4, 5, and 6. The goal of the procedure, which was purplish discoloration and pulselessness of the extremity, was maintained. After 5 min of ischemia, reperfusion was achieved for 5 min. Repeating this procedure 3 times was defined as hypoxia attacks (RIC). Retrieved ovaries were examined for tissue injury with biochemical, histopathologic, and immunohistochemical analysis.

It is not clinically conceivable to prepare the tissue for pre-ischemia in ovarian torsion. However, the RIC application, which will be initiated if torsion is suspected when arrangements are made for surgery, might be a simple, effective, and inexpensive approach to prevent I/R injury in the clinic. 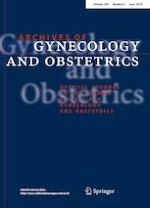 Modified hysterectomy for placenta increta and percreta: modifications of what?

Current practice and physicians’ opinion about preoperative hair removal as a part of ERAS pathway implementation in gynecology and gynecology–oncology: a NOGGO-AGO survey of 148 gynecological departments in Germany

An observation study of the emergency intervention in placenta accreta spectrum

The immature platelet fraction in hypertensive disease during pregnancy