Our aim is identify a new approach to vocal cord leukoplakia treatment and detect to efficiency of proton pump inhibitors.

A ‘First Assessment Scale’ was prepared. This scale included the lesion’s and the patient’s characteristics. Using this scale, 24 patients included to the study. 20 mg rabeprazole twice daily was applied to all patients. At the end of 3rd month, a ‘Second Assessment Scale’ was used and two groups created. In group 1, 19 patients were accepted to responsive for the therapy and received the same therapy. The group 2 was included five patients that accepted unresponsive to treatment and directed to surgery. All patients received the same treatment additionally 3 months. At the end of 6th month, the Reflux Symptom Index (RSI), the Reflux Finding Score (RFS) and the Red–Green–Blue (RGB) values evaluated and comparisons were made.

The proton pump inhibitor treatment may be beneficial for the selected patients. The scales that we prepared were useful for lesion assesment. 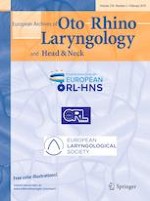 The amendatory effect of hesperidin and thymol in allergic rhinitis: an ovalbumin-induced rat model

Odontogenic rhinosinusitis and sinonasal complications of dental disease or treatment: prospective validation of a classification and treatment protocol

A modified method of local infiltration for endoscopic stapes surgery: how I do it