Choline kinase alpha (ChoKα) is a critical enzyme in the synthesis of phosphatidylcholine, a major structural component of eukaryotic cell membranes. ChoKα is overexpressed in a large variety of tumor cells and has been proposed as a target for personalized medicine, both in cancer therapy and rheumatoid arthritis.

Triterpene quinone methides (TPQ) bioactive compounds isolated from plants of the Celastraceae family and a set of their semisynthetic derivatives were tested against the recombinant human ChoKα. Those found active as potent enzymatic inhibitors were tested in vitro for antiproliferative activity against HT29 colorectal adenocarcinoma cells, and one of the active compounds was tested for in vivo antitumoral activity in mice xenographs of HT29 cells.

Among 59 natural and semisynthetic TPQs tested in an ex vivo system, 14 were highly active as inhibitors of the enzyme ChoKα with IC50 <10 μM. Nine of these were potent antiproliferative agents (IC50 <10 μM) against tumor cells. At least one compound was identified as a new antitumoral drug based on its in vivo activity against xenographs of human HT-29 colon adenocarcinoma cells.

The identification of a new family of natural and semisynthetic compounds with potent inhibitory activity against ChoKα and both in vitro antiproliferative and in vivo antitumoral activity supports further research on these inhibitors as potential anticancer agents. Their likely role as antiproliferative drugs deserves further studies in models of rheumatoid arthritis. 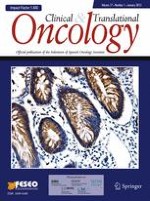 Translation in solid cancer: are size‐based response criteria an anachronism?

Interleukin-17 is a favorable prognostic marker for colorectal cancer