We aimed to introduce a new surgical method for open appendectomy including a right groin incision with adipocutaneous flap and to compare its feasibility, safety, and cosmetic outcomes with classic McBurney’s incision.

Patients with the diagnosis of acute appendicitis who were candidates for appendectomy surgery at General Surgery Department, Besat Hospital, Hamadan University of Medical Sciences, Iran, in 2016 and 2017, were enrolled in a randomized controlled clinical study. Patients were randomly assigned to two groups each containing 50 patients. In the case and control groups, patients underwent appendectomy using right groin incision with adipocutaneous flap and traditional McBurney’s methods, respectively.

One hundred patients with the mean age of 23.6 years (range = 4–44) old including 65 males were enrolled in the study. Patients’ demographics, histopathology, and anatomical location of the appendix were not significantly different in the case and control groups. There was no significant difference in postoperative wound infection, cellulitis, hematoma, and seroma between the two groups. Patients in the case group were significantly more satisfied in terms of cosmesis than in the control group (P < .001); however, the operative time and pain were higher in the case group compared to the control group (P values = 0.016 and 0.033, respectively).

The right groin incision for open appendectomy may be safe and feasible and the most cosmetically appealing method especially in children and patients with cosmetic concerns. 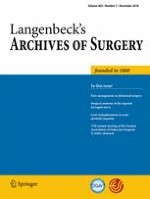 Surgical anatomy of the external branch of the superior laryngeal nerve: a systematic review and meta-analysis