Non-small cell lung cancer (NSCLC) is the most common primary tumor in patients developing brain metastasis. This study was performed to develop and validate a survival score particularly for this group of patients.

In this study, the data of 514 patients treated with whole-brain radiotherapy (WBRT) alone for brain metastasis from NSCLC were retrospectively analyzed. The patients were divided into a test group (n = 257) and a validation group (n = 257). In the multivariate analysis of the test group, gender, performance status, and extracranial metastases were independent predictors of survival and, therefore, included in the scoring system. The score for each of the three factors was obtained from the 6-month survival rate (in %) divided by 10. The total scores that represented the sum of the three scores were 5, 8, 9, 11, 12, or 15 points. Three prognostic groups were formed according to the total scores.

This new score appears valid and reproducible. It can help predict the survival of patients with brain metastasis from NSCLC. 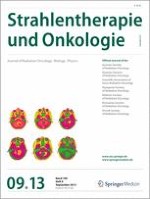 Treatment planning after hydrogel injection during radiotherapy of prostate cancer

Incidence and clinical course of radionecrosis in children with brain tumors