Many of the surgical patients with lung cancer die by metastasis originated from circulating tumor cells (CTCs) which are seeds of metastases. A ring-shaped catching forceps, which generates the great pressure by compression, may reduce the risk of tumor cell spreading. Here, we investigated the efficacy of such forceps based on CTC occurrence.

Twenty-three patients with clinical stage IA lung cancer who underwent a pulmonary wedge resection were investigated in a clinical-pathological manner. They were divided into those treated using ring forceps catching without tumor release (R group) (n = 16) and non-complete use of ring forceps (N group) (n = 7), then were determined circulating tumor cells (CTCs).

Radiographic findings, tumor location, pathological diagnosis, and stapling method were not significantly different between the groups. The risk of detection of CTCs after surgery was significantly lower in group R (12.5 vs. 85.7%, p = 0.02), whereas there were no significant differences found in risk of negative-stapled margin cytology, pre-OP CTC detection, V (+), Ly (+), and Pl (+).

Patients who underwent pulmonary wedge resection of lung cancer had low chance of CTC detection after surgery when they were treated with ring forceps without tumor release, which might become a no-touch isolation technique. 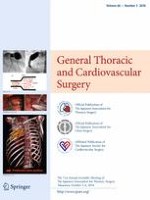