Peppermint oil (PO) has shown promise as an IBS therapy, but previous trials have demonstrated variable efficacy and tolerability results.

To evaluate the efficacy and tolerability of a novel formulation of PO designed for sustained release in the small intestine in patients with IBS-M and IBS-D.

This is a 4-week, randomized, double-blind, placebo-controlled clinical trial of PO or identical placebo 3 times daily in patients fulfilling Rome III criteria for IBS-M or IBS-D. The primary endpoint was the change from baseline in the Total IBS Symptom Score (TISS) after 4 weeks of treatment.

A novel PO formulation designed for sustained release in the small intestine is a safe, effective treatment capable of providing rapid relief of IBS symptoms. 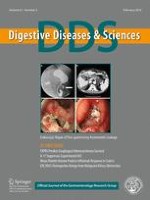 Bin1 Antibodies for IBD Therapy: Is Permeability the Answer BAR None?

Introduction to the “Fellows and Young GIs Section”