Patients with a Fontan circulation have impaired exercise capacity. Cardiac rehabilitation (CR) has shown promise in enhancing peak exercise parameters in this population, but an improvement in submaximal exercise has not been consistently demonstrated. We assessed the hypothesis that participation in CR will be associated with more efficient oxygen extraction and ventilation during submaximal exercise. In this prospective study, pediatric Fontans completed two 60 min CR sessions per week for 12 weeks. Cardiopulmonary exercise testing and stress echocardiography were performed at baseline and last CR session, and then compared with a paired sample t test. Ten pediatric Fontans completed the study. Five had tricuspid atresia and five had hypoplastic left heart syndrome. No serious adverse events occurred during CR sessions. Peak indexed oxygen consumption increased by a mean of 3.7 mL/kg/min (95% CI 1.5–5.9; p = 0.004), and peak oxygen pulse increased by a mean of 0.9 mL/beat (95% CI 0.4–1.4; p = 0.004). The peak respiratory exchange ratio did not change significantly. The significant difference in oxygen pulse became evident during submaximal exercise without a corresponding difference in echocardiographic stroke volume. Indexed oxygen consumption at ventilatory anaerobic threshold increased by a mean of 3.0 mL/kg/min (95% CI − 0.07 to 6.0; p = 0.055). The slope for the volume of expired ventilation to volume of carbon dioxide production improved by a mean of 4.5 (95% CI − 8.4 to − 0.6; p = 0.03). We observed significant improvements in both submaximal and peak exercise performance in pediatric Fontans undergoing CR with no serious adverse events. These changes appeared to be mediated, at least in part, by more efficient oxygen extraction and ventilation. 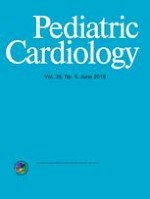 Study on ECG in the Adolescent

A Shift in Focus