Psychological research on the relationship between spirituality/religion and mental health has grown considerably over the past several decades and now constitutes a sizable body of scholarship. Among dimensions of S/R, positive beliefs about God have been significantly related to better mental health outcomes, and conversely negative beliefs about God are generally associated with more distress. However, prior research on this topic has relied heavily upon self-report Likert-type scales, which are vulnerable to self-report biases and measure only explicit cognitive processes. In this study, we developed and validated an implicit social cognition task, the Positive/Negative God Go/No-go Association Task (PNG-GNAT), for use in psychological research on spirituality and religion (S/R). Preliminary evidence in a large sample (N = 381) suggests that the PNG-GNAT demonstrates internal consistency, test–retest and split-half reliability, and concurrent evidence of validity. Further, our results suggest that PNG-GNAT scores represent different underlying dimensions of S/R than explicit self-report measures, and incrementally predict mental health above and beyond self-report assessment. The PNG-GNAT appears to be an effective tool for measuring implicit positive/negative beliefs about God. 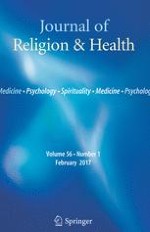 The Power of Being Vulnerable in Christian Soul Care: Common Humanity and Humility

Slowing Down Time: An Exploration of Personal Life Extension Desirability as it Relates to Religiosity and Specific Religious Beliefs

The Effect of Holy Qur’an Recitation on Depressive Symptoms in Hemodialysis Patients: A Randomized Clinical Trial

The IRB as Research Subject