A 75-year-old woman was diagnosed with esophageal cancer with difficulty in swallowing. She had a past history of rheumatoid arthritis, scleroderma, interstitial pneumonia, angina pectoris (with coronary artery bypass surgery) and arrhythmia (with pacemaker implantation). She refused surgery, and chemotherapy and radiotherapy were not performed because of the high risk accompanied with multiple comorbidities. She received proton therapy at another hospital and the primary lesion shrank. Bone metastasis in the thoracic vertebrae was diagnosed 10 months after diagnosis of esophageal cancer. Non-steroidal anti-inflammatory drugs and zoledronic acid were administered for back pain. Oxycodone was also administered but discontinued due to nausea. After strontium-89 (89Sr) chloride administration, her back pain was relieved. 89Sr was administered five times every 3 months, and the pain did not worsen until her death due to pneumonia 2 years after diagnosis of esophageal cancer. 89Sr was effective for pain from bone metastasis of esophageal cancer, and its repeated administration was safe. 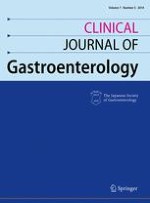 Perineurioma in the sigmoid colon diagnosed and treated by endoscopic resection

Spontaneous rupture of a hepatic angiomyolipoma: Report of a case

Endoscopic ultrasonography-guided transmural drainage of an infected hepatic cyst due to Edwardsiella tarda: a case report