Patients received two or three 28-day cycles of DCS therapy (docetaxel at 40 mg/m2 and cisplatin at 60 mg/m2 on day 1, S-1 at 40 mg/m2 twice daily for 2 weeks) followed by gastrectomy with D2 plus para-aortic nodal dissection. After R0 resection, S-1 chemotherapy was given for 1 year. The primary end point was the response rate (RR) to preoperative chemotherapy determined by central peer review according to the Response Evaluation Criteria in Solid Tumors version 1.0. The planned sample size was 50, with one-sided alpha of 10 %, power of 80 %, expected RR of 80 %, and threshold of 65 %.

Preoperative DCS therapy was feasible but did not show a sufficient RR. Preoperative cisplatin and S-1 therapy is still considered the tentative standard treatment for this population until survival results are known. 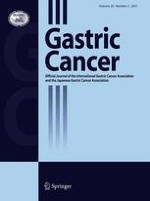