It is well-established that focusing on improvements in glycaemic control in patients with diabetes reduces the risk of developing microvascular complications [ 1, 2]. Addressing postprandial glucose excursions is important for improving overall glycaemic control, particularly in patients with mild to moderate overall hyperglycaemia [ 3, 4]. Thus, focus on postprandial glucose control seems to be a necessity to achieve glycaemic targets in more patients with diabetes.
Anzeige
In healthy individuals ingesting a meal, immediate endogenous insulin secretion leads to an inhibition of hepatic glucose production, which is important for postprandial glucose control [ 5]. Accordingly, in patients with diabetes, fast absorption and early action of subcutaneously administered mealtime insulin are essential goals in order to counteract postprandial hyperglycaemia, at least in part through inhibition of hepatic glucose production [ 6, 7]. Another objective is to achieve an appropriately short duration of action, thereby reducing the risk of late postprandial hypoglycaemia [ 7]. Although current rapid-acting insulin analogues have advantages over regular human insulin in terms of accelerated absorption, earlier onset of action and shorter duration of action [ 6, 8, 9], absorption of current rapid-acting insulin products still occurs considerably slower than endogenous prandial insulin release in the healthy state [ 7, 9].
Fast-acting insulin aspart (faster aspart) is insulin aspart (IAsp) in a new formulation in which two additional excipients ( l-arginine and niacinamide) have been added. l-arginine and niacinamide are both included in the US FDA database of inactive ingredients in products for injection at higher concentrations than present in faster aspart [ 10]. In faster aspart, l-arginine serves as a stabilising agent, while niacinamide is responsible for accelerated initial absorption after subcutaneous administration. A proposed mechanism for the latter is that niacinamide promotes the formation of IAsp monomers in the subcutis and augments the permeation rate of IAsp across capillary endothelial cells [ 11].
The aim of the current investigation was to compare the pharmacological characteristics between faster aspart and IAsp in a post hoc analysis of pooled data from all available and relevant clinical pharmacology trials in the faster aspart clinical development programme. The focus of the investigation was onset of exposure and glucose-lowering effect, early exposure and glucose-lowering effect, as well as offset of exposure and glucose-lowering effect. The pooled analysis has been conducted in order to obtain a robust summary of the differences in pharmacokinetic and pharmacodynamic properties between faster aspart and IAsp in adult subjects with type 1 diabetes.

This report presents a post hoc analysis of the pharmacokinetic and pharmacodynamic properties of faster aspart compared with IAsp based on data from individual phase I, randomised, double-blind, crossover trials (Online Resource 1, Table S1). A total of six trials contributed with pharmacokinetic data, while the three trials using a glucose clamp also contributed with pharmacodynamic data (see the Study Procedures and Assessments section). Trials were conducted at the Children’s and Youth Hospital AUF DER BULT, Hannover, Germany (Trial 1) [ 12], Department of Internal Medicine, Medical University of Graz, Austria (Trials 2 and 3) and Profil, Neuss, Germany (Trials 4, 5 and 6) [ 13– 15]. Irrespective of trial site, comparable overall methodology was used. Furthermore, the trials shared several characteristics, such as the crossover design and the inclusion of IAsp as the comparator. Therefore, it was deemed valid to perform a pooled analysis of the six trials.
Anzeige
In each trial, the protocol, protocol amendments, consent form and subject information sheets were reviewed and approved by health authorities, according to local regulations, and by local ethics committees prior to trial initiation. All trials were performed in accordance with the Declaration of Helsinki and Good Clinical Practice. Before any trial-related activities were initiated, written informed consent was obtained from the participating subjects. The trials were registered at ClinicalTrials.gov: NCT02035371 (Trial 1), NCT01924637 (Trial 2), NCT02131246 (Trial 3), NCT02033239 (Trial 4), NCT02003677 (Trial 5), NCT01618188 (Trial 6).

The pooled analysis was based on data from 218 adult subjects with type 1 diabetes aged 18–64 years (both inclusive). For two of the trials, a subset of the full trial population was included because these trials also enrolled subjects aged <18 years (Trial 1) or >64 years (Trial 5).
Key inclusion criteria for each trial are shown in Online Resource 1, Table S1. In addition, all subjects received treatment with multiple daily insulin injections or insulin pump therapy for at least 12 months with total insulin dose <1.2 (I)U/kg/day and bolus insulin dose <0.7 (I)U/kg/day (and bolus insulin dose ≥0.3 (I)U/kg/day in Trials 1, 2 and 3). General exclusion criteria were clinically significant concomitant diseases (malignant neoplasms or cardiovascular, renal, hepatic, respiratory, gastrointestinal, haematological, dermatological, neurological or psychiatric diseases), donation of any blood or plasma in the past month or more than 500 mL within 3 months prior to screening, smoking, or current treatment with drug(s) which might interfere with glucose metabolism. Pregnant or breastfeeding women were also excluded.

In all trials, subjects received single subcutaneous dosing of 0.2 U/kg faster aspart (100 U/mL; Novo Nordisk, Bagsværd, Denmark) and IAsp (NovoRapid ®; 100 U/mL; Novo Nordisk) into a lifted skin fold of the lower abdominal wall above the inguinal area. There was a washout period of 3–12 days (3–15 days in Trial 4) between dosing visits, where subjects resumed their usual insulin treatment. Furthermore, subjects’ current insulin therapy was washed out before each dosing of the trial product: Subjects were excluded from the dosing visit if they had received insulin degludec within 72 h prior to dosing, insulin glargine or insulin detemir within 48 h prior to dosing, intermediate-acting insulin (such as neutral protamine Hagedorn [NPH] insulin) within 22 h prior to dosing, or IAsp within 12 h (for bolus) or 8 h (for basal infusion using a pump) prior to dosing.
Blood samples for serum IAsp assessment were taken within 2 min before dosing (within 5 min before dosing in Trial 6), then every 2 min from dosing until 20 min post-dosing, every 5 min from 20 to 80 min, every 10 min from 80 min to 2 h, every 15 min from 2 to 3 h (from 2 to 2.5 h in Trial 4), and then at 3, 3.5, 4, 5 (not Trial 4), 5.5 (only Trial 4), 6 (not Trial 4), 7, 8 (not Trial 4), 9 (only Trial 4), 10 (not Trial 4) and 12 h post-dosing. A validated IAsp specific enzyme-linked immunosorbent assay with a lower limit of quantification (LLOQ) of 10 pmol/L was used to measure free serum IAsp concentrations (polyethylene glycol-precipitated).
In Trials 4, 5 and 6, which were included in the pharmacodynamic analysis, an automated euglycaemic glucose clamp, with a target blood glucose concentration of 5.5 mmol/L (100 mg/dL), was performed for 12 h post-dosing (ClampArt ®, Profil, Neuss, Germany, in Trials 4 and 5; Biostator ®, MTB Medizintechnik, Amstetten, Germany, in Trial 6). The clamp was terminated earlier than 12 h post-dosing in case blood glucose was consistently above 11.1 mmol/L (200 mg/dL) without the need for intravenous glucose infusion during the last 30 min. Details of the glucose clamp procedure have previously been provided by Heise et al. [ 15]. In Trials 1, 2 and 3, subjects underwent a standardised liquid meal test for 6 h after dosing (data not included in the pooled pharmacodynamic analysis).
In Trial 4, subjects received three dose levels (0.1, 0.2 and 0.4 U/kg) of faster aspart and IAsp, as well as two additional doses of either 0.2 U/kg faster aspart or 0.2 U/kg IAsp at a total of eight dosing visits. Results from all 0.2 U/kg dosing visits are included in the current pooled analysis. In Trial 6, subjects received two formulations of faster aspart, but only data for the formulation being pursued in further clinical development are included in the current pooled analysis.

A total of 218 subjects were included in the pharmacokinetic analysis contributing with 261 insulin profiles for faster aspart and 256 insulin profiles for IAsp, while 119 subjects were included in the pharmacodynamic analysis contributing with 163 GIR profiles for faster aspart and 160 GIR profiles for IAsp. Baseline characteristics for each trial and for the pooled population are summarised in Online Resource 1, Table S2. Overall, for the pharmacokinetic analysis, the mean age of subjects was 36 years (range 18–63 years), the majority of subjects were male (70%), mean body weight was 75.6 kg (range 52.6–105.7 kg), and mean BMI was 24.1 kg/m 2 (range 18.9–28.7). Mean duration of diabetes was 18 years (range 1–54 years), and mean HbA 1c at baseline was 7.4% (57 mmol/mol) [range 4.7–9.2%; 28–77 mmol/mol]. Subjects contributing to the pharmacodynamic analysis had comparable baseline characteristics (Online Resource 1, Table S2).

3.3 Offset of Exposure and Glucose-Lowering Effect

The accelerated pharmacological properties of faster aspart were consistent across all studies included in this pooled analysis of adult subjects with type 1 diabetes. The analysis demonstrated that faster aspart provides faster onset and greater early exposure and glucose-lowering effect, as well as earlier offset, compared with IAsp. Thus, faster aspart has the potential to more closely mimic the endogenous prandial insulin secretion pattern seen in healthy individuals and thereby to provide improved postprandial glucose control in patients with diabetes compared with currently available rapid-acting insulin analogues.

The authors would like to thank Henrik Jarlov, MD, Novo Nordisk A/S, for his review of, and input into, the manuscript, and Carsten Roepstorff, PhD, CR Pharma Consult, Copenhagen, Denmark, for providing medical writing support, which was funded by Novo Nordisk A/S.

All procedures performed in studies involving human participants were in accordance with the ethical standards of the institutional and/or national research committee and with the 1964 Helsinki declaration and its later amendments or comparable ethical standards. Informed consent was obtained from all individual participants included in the study.

This investigation was funded by Novo Nordisk.

Tim Heise is shareholder of Profil, which has received research funds from Adocia, AstraZeneca, Becton–Dickinson, Biocon, Boehringer Ingelheim, Dance Biopharm, Eli Lilly, Grünenthal, Gulf Pharmaceutical Industries, Johnson & Johnson, Marvel, MedImmune, Medtronic, Novartis, Novo Nordisk, Roche Diagnostics, Sanofi, Senseonics and Zealand Pharma. In addition, Tim Heise is member of advisory panels for Novo Nordisk and received speaker honoraria and travel grants from Eli Lilly, Mylan and Novo Nordisk. Thomas R. Pieber has received research support from AstraZeneca and Novo Nordisk, has served in advisory panels for AstraZeneca, Bristol-Myers Squibb, Eli Lilly, Novo Nordisk and Roche Diabetes Care, and is an employee of CBmed—Center for Biomarker Research in Medicine. Thomas Danne has received research support from and/or has served in advisory panels for Abbott, Bayer, Boehringer Ingelheim, Dexcom, Eli Lilly, Medtronic, Novo Nordisk, Roche, Sanofi and Ypsomed, and is a shareholder of DreaMed Diabetes. Lars Erichsen and Hanne Haahr are employees and shareholders of Novo Nordisk.
Open AccessThis article is distributed under the terms of the Creative Commons Attribution-NonCommercial 4.0 International License (http://creativecommons.org/licenses/by-nc/4.0/), which permits any noncommercial use, distribution, and reproduction in any medium, provided you give appropriate credit to the original author(s) and the source, provide a link to the Creative Commons license, and indicate if changes were made. 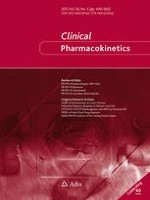 Clinical Pharmacokinetics and Pharmacodynamics of Cabozantinib

Pharmacokinetics and Pharmacodynamics of Lurasidone Hydrochloride, a Second-Generation Antipsychotic: A Systematic Review of the Published Literature

Clinical Pharmacokinetics and Pharmacodynamics of Febuxostat