Patients undergoing transsphenoidal pituitary surgery (TSS) are at risk for several serious complications, including the syndrome of inappropriate antidiuretic hormone and subsequent hyponatremia.

In this study, we examined the effect of 1 week of post-discharge fluid restriction to 1.0 L daily on rates of post-operative readmission for hyponatremia.

We retrospectively analyzed all patients undergoing TSS from 2008 to 2014 and prospectively recorded patient data from 2015 to 2017. Patients were divided into a control cohort (2008–2014), who were discharged with instructions to drink to thirst; and an intervention cohort (2015–2017) who were instructed to drink less than 1.0 L daily for 1 week post-operatively. 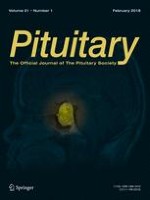 Excellence in the treatment of patients with pituitary tumors

Guidelines versus real life practice: the case of colonoscopy in acromegaly