We aimed to investigate the association of nut intake with cognitive function in Chinese adults aged 55 and over.

This was a prospective open cohort study with repeated measurements of diet and cognition scores.

Global cognitive function measured repeatedly in 1997, 2001, 2004, and 2006 using a subset of modified Telephone Interview for Cognitive Status; poor cognitive function was defined as cognition score<7. Nut consumption was collected using 3-day 24 recall method in 1991, 1993, and at surveys of cognition assessment. 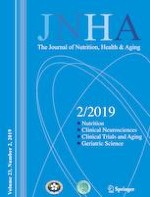 The Effect of β-Hydroxy-β-Methylbutyrate (HMB) on Sarcopenia and Functional Frailty in Older Persons: A Systematic Review

Sarcopenia is Related to Mortality in the Acutely Hospitalized Geriatric Patient