This was a secondary analysis of a prospective clinical trial that accrued patients at a single institution from 2013 to 2016. Patients with limited-stage SCLC treated with standard chemo-radiation received PCI 25 Gy/10 fractions, with mean hippocampal dose limited to < 8 Gy. Whole brain volumes were measured using MR imaging obtained before and at 6, 12, 18, and 24 months after PCI. Verbal memory was measured by the Hopkins Verbal Learning Test-Revised (HVLT-R) before and at 6 and 12 months after PCI. Univariate and multivariate linear regression evaluated associations between changes in whole brain volume and verbal memory.

This is the first study to correlate reduction in whole brain volume and decline in neurocognitive function following whole brain radiation therapy (WBRT). This suggests that loss of brain volume after WBRT may be clinically significant and subsequently impact cognition and quality of life. 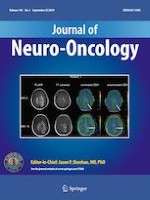 Longitudinal, leakage corrected and uncorrected rCBV during the first-line treatment of glioblastoma: a prospective study