In this phase I, randomized cross-over, multi-center study, abiraterone pharmacokinetics (PK) were evaluated in patients with metastatic castration-resistant prostate cancer who were treated for 14 days with 1000 mg abiraterone acetate taken fasted, followed by 14 days of treatment with 500 mg taken with a CB.

In conclusion, a bioequivalent lower dose of abiraterone taken with food could not be established in our study. Although based on the absence of a exposure–toxicity relationship, the strict bioequivalence margins as defined by the FDA guidelines could be applied more flexible for abiraterone. Information on the effect of food on abiraterone pharmacokinetics as presented in our study can be used for patients with difficulties taken their medication fasted. 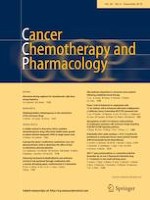 Metformin plus first-line chemotherapy versus chemotherapy alone in the treatment of epithelial ovarian cancer: a prospective open-label pilot trial

Alternative dosing regimens for atezolizumab: an example of model-informed drug development in the postmarketing setting

A phase I delayed-start, randomized and pharmacodynamic study of metformin and chemotherapy in patients with solid tumors