This study compared the efficacy of low-level laser therapy (LLLT) versus laser acupuncture therapy (LAT) in patients with temporomandibular disorders (TMDs). In this randomized, double-blind clinical trial, 45 TMD patients were randomly divided into three groups. In group 1 (LLLT), a GaAlAs laser was applied on painful masticatory muscles and TMJs (810 nm, 200 mW, 30 s per point, Gaussian beam, spot size 0.28 cm2, 21 J/cm2) two times a week for 5 weeks. In group 2 (LAT), the laser was emitted bilaterally on acupuncture points (ST6, ST7, LI4) with the same settings as the LLLT group. Group 3 (placebo) underwent treatment with sham laser. The patients were evaluated before treatment (T1), after 5 (T2) and 10 (T3) laser applications, and 1 month later (T4). The mandibular range of motion as well as pain intensity in masticatory system was recorded at each interval. There was no significant difference in mouth opening between the groups (p > 0.05), but the amount of lateral excursive and protrusive movements was significantly greater in LLLT and LAT groups than the placebo group at some intervals (p < 0.05). The overall pain intensity and pain degree at masticatory muscles (except temporal muscle) and TMJs were significantly lower in both experimental groups than the placebo group at most intervals after therapy (p < 0.05). Both LLLT and LAT were effective in reducing pain and increasing excursive and protrusive mandibular motion in TMD patients. LAT could be suggested as a suitable alternative to LLLT, as it provided effective results while taking less chair time.
Anzeige 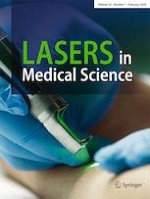 The impact of photobiomodulation of major salivary glands on caries risk

Laser-assisted prevention of enamel caries: a 10-year review of the literature