US Latina women experience disproportionately high cervical cancer incidence and mortality rates. These health disparities are largely preventable with routine pap tests and human papillomavirus (HPV) screening. This study tested the efficacy of a cervical cancer education intervention to improve risk factor knowledge, attitudes, self-efficacy, and self-reported behavior related to cervical cancer screening among low-income Latinas who had not been screened in the past 2 years, compared to a usual care control group. Low-income Latinas who had not had a pap test in the prior 2 years were recruited from three Federally Qualified Health Centers and randomly assigned to intervention and control groups, with in-person assessment at baseline and 6-month follow-up. Women in the intervention group received a one-time low-literacy cervical cancer education program through an interactive, multimedia kiosk in either English or Spanish based on their language preference. Compared to the control group, the intervention group demonstrated greater knowledge (p < 0.0001) and more favorable attitudes at follow-up; fewer intervention group women never thought of getting a pap test (46 vs. 54 %, p = 0.050) or agreed that it is fate whether a woman gets cervical cancer or not (24 vs. 31 %, p = 0.043). The groups did not differ significantly on the proportion who had obtained or made an appointment for a pap test at follow-up (51 vs. 48 %, p = 0.35). Both groups reported high levels of self-efficacy regarding pap screening at post-intervention. A one-time interactive, multimedia educational intervention improved cervical cancer knowledge and attitudes among low-income Latinas but had no effect on cervical cancer-screening behavior. Exposure of the control group to the pre-test conducted on the multimedia kiosk may have influenced their screening behavior. 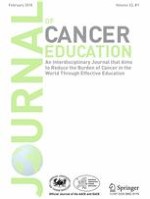 Integrating Collaborative Learning and Competition in a Hematology/Oncology Training Program

Awareness and Knowledge About HPV and HPV Vaccine Among Romanian Women

Efficacy of Cancer Care Communication Between Clinicians and Latino Patients in a Rural US-Mexico Border Region: a Qualitative Study of Barriers and Facilitators to Better Communication