Intraperitoneal administration of paclitaxel had been considered a promising option to treat peritoneal metastasis, the most frequent pattern of recurrence in gastric cancer after D2 gastrectomy, but its safety and efficacy after gastrectomy had not been fully explored.

A phase II randomized comparison of postoperative intraperitoneal (IP) vs. intravenous (IV) paclitaxel was conducted. Patients with resectable gastric linitis plastica, cancer with minimal amount of peritoneal deposits (P1), or cancer positive for the peritoneal washing cytology (CY1) were eligible. After intraoperative confirmation of the above disease status and of resectability, patients were randomized to be treated either by the IP therapy (paclitaxel 60 mg/m2 delivered intraperitoneally on days 0, 14, 21, 28, 42, 49, and 56) or the IV therapy (80 mg/m2 administered intravenously using the identical schedule) before receiving further treatments with evidence-based systemic chemotherapy. The primary endpoint was 2-year survival rate.

We were unable to prove superiority of the IP paclitaxel over IV paclitaxel delivered after surgery to control advanced gastric cancer with high risk of peritoneal recurrence. 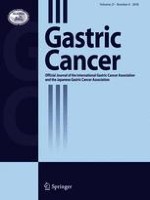 ypTNM staging after neoadjuvant chemotherapy in the Chinese gastric cancer population: an evaluation on the prognostic value of the AJCC eighth edition cancer staging system

Salvage chemotherapy with the combination of oxaliplatin, leucovorin, and 5-fluorouracil in advanced gastric cancer refractory or intolerant to fluoropyrimidines, platinum, taxanes, and irinotecan