Lymphatic filariasis is a major health problem in India with a large number of patients tending to be asymptomatic. In the Southeast and South Asian regions, Wuchereria bancrofti is the most prevalent parasite, causing filariasis in 99.4% of cases. While kidney involvement is a rare event in chronic filariasis, this case is unique because AA-type renal amyloidosis occurs in chronic W. bancrofti infection. We present here a unique case of lymphatic filariasis. The patient, a 25-year-old male who was previously diagnosed with right lower limb filarial lymphedema and had undergone lymphovenous anastomosis, was admitted for evaluation of persistent nephrotic-range proteinuria. Autoimmune markers in the form of anti-nuclear antibodies, anti-double-stranded DNA and anti-neutrophil cytoplasmic antibody were negative; C3 was normal. Urine analysis revealed inactive sediment with moderate proteinuria. Both serum and urine electrophoresis were negative for paraproteins and bone marrow aspirate and biopsy were normal. Evidence of active filarial infection was established on the basis of microfilariae in the peripheral smear and a positive W. bancrofti antigen test. Kidney biopsy revealed renal amyloidosis when stained with Congo red and anti-AA immunostain. The patient’s proteinuria improved on conservative management with angiotensin-converting enzyme inhibitors and a course of antifilarial drugs. His proteinuria returned to <1 g/24 h with normalization of renal function and no significant proteinuria on periodic follow-up at 6-month and 1-year intervals. Repeat kidney biopsy after 1.5 years showed regression of amyloidosis. Repeat demonstration of filarial antigen and microfilariae in the peripheral smear were negative on multiple occasions during the follow-up period. Although various chronic infections can lead to secondary renal amyloidosis, this is the first case reported in world literature where secondary amyloidosis developed as a complication of chronic filarial infection due to W. bancrofti. This is probably also the first case reported in world literature where renal amyloidosis has an etiological association with W. bancrofti infection and where patient symptoms improved with antifilarial and antiproteinuric management. 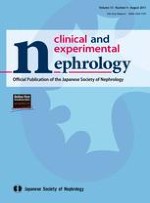