Managing hip fracture surgery in patients taking clopidogrel is challenging. The optimal timing for surgery remains unclear. Early surgery in such patients potentially increases peri-operative bleeding, whereas delayed surgery has been shown to be associated with worse postoperative outcomes. The aim of this study was to investigate whether a delay to surgery affects total blood loss, bleeding kinetics, blood transfusion requirements, or post-operative outcomes.

A retrospective monocentric study including all hip fracture patients treated with clopidogrel between 2011 and 2016 (39 patients) was carried out. Patients who underwent delayed surgery after withholding clopidogrel for five days or more, from 2011 to 2013, were compared to patients who benefited from earlier surgical procedures (within 48 hours of admission) from 2014 to 2016. 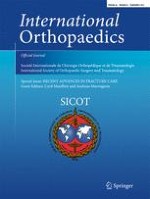