FGF21 (fibroblast growth factor 21) is a regulator of metabolism and performs an important role in glucose and lipid metabolism and the maintenance of energy balance. FGF21 is principally expressed in the liver, but it can also be found in the pancreas, skeletal muscle, and adipose tissue. It is known that levels of serum FGF21 are significantly elevated in obese, insulin-resistant patients, and those with metabolic syndrome. Elevated levels of FGF21 in serum during the early stages of various metabolic diseases are considered a compensatory response by the organism. Therefore, FGF21 is considered a hormone in response to stress and an early diagnostic marker of disease. Diabetic cardiomyopathy is a special type of cardiac complication, characterized as a chronic myocardial disorder caused by diabetes. The pathological process includes increased oxidative stress, energy metabolism in myocardial cells, an inflammatory response, and myocardial cell apoptosis. A growing body of evidence suggests that FGF21 has the potential to be an effective drug for the treatment of diabetic cardiomyopathy. Here, we review recent progress on the characteristics of FGF21 in its protective role, especially in pathological processes such as suppressing apoptosis in the myocardium, reducing inflammation in cardiomyocytes, reducing oxidative stress, and promoting fatty acid oxidation. In addition, we explore the possibility that diabetic cardiomyopathy can be delayed through the application of FGF21, providing possible therapeutic targets of the disease. 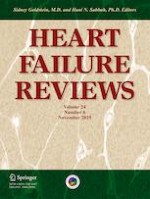 Cardio-oncology, the myth of Sisyphus, and cardiovascular disease in breast cancer survivors

Research progress on the pathogenesis of CTEPH

Patients with high-dose diuretics should get ultrafiltration in the management of decompensated heart failure: a meta-analysis

Immune cell diversity contributes to the pathogenesis of myocarditis

Biomarkers in heart failure: the past, current and future