Owing to the anatomical basis established on the detailed course, distribution and innervations of buccal nerve in the literature, we believe that an effective and extensive buccal nerve block could be achieved when the nerve is anesthetized proximal to its branching point which relates to anteromedial aspect of ramus (retromolar fossa). Though several techniques of inferior alveolar nerve block (IANB) including few single-penetration approaches were already well reviewed and practiced, pitfalls remained in terms of achieving adequate retromolar soft tissue anesthesia, as well as undermining the very importance of contacting the bone and the orientation of the bevel. We propose a simplified single-penetration technique aligning almost similar to conventional technique and its well-adopted landmarks, but still obviating the need for a separate penetration for long buccal nerve anesthesia.

To study the efficacy of a simplified single-penetration technique for mandibular anesthesia.

To study the adequacy of the simplified IANB technique in minimizing the number of penetrations required to achieve buccal nerve anesthesia decreasing patient’s pain and discomfort when IANB is performed and the ease of adaptability across the operators.

Simplified technique minimizes the number of penetrations, which substantially decreases patient’s pain and discomfort levels not only during injection, but also during surgical procedures on mandibular posterior region because of extensive and profound buccal nerve territorial anesthesia. 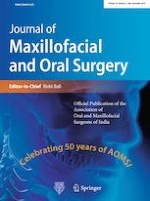 Use of a Versatile Buccinator Myomucosal Flap in the Palatal Defect

The Difficult Route to Glottis in Cleft Patients Simplified