Integrase strand transfer inhibitors (INSTI) are currently being investigated for the treatment of HIV in pregnancy. The purpose of this study is to evaluate the differences in maternal and infant outcomes in HIV-positive mothers treated with INSTI-containing antiretroviral therapy (ART) during pregnancy compared to protease inhibitor (PI)-containing ART.

A retrospective, cohort study of INSTI- and PI-based ART used in pregnancy between 2007 and 2015 was performed. The primary objective was to evaluate the differences in viral load (VL) suppression prior to delivery. Secondary endpoints included time to and duration of VL suppression and safety parameters in both mothers and infants. For the primary analysis, the two arms were matched 1:2 INSTI to PI based on the presence or absence of viremia at the time of pregnancy determination. Additional analysis was performed on the entire matched and unmatched dataset.

Twenty-one patients were matched (7 INSTI and 14 PI). There were no significant differences between groups with respect to the proportion of patients with VL suppression prior to delivery (71.4% INSTI vs. 92.9% PI, p = 0.247), and there were no significant differences in any of the secondary endpoints. Patients with documented adherence issues were statistically more likely to not be virologically suppressed prior to delivery (p = 0.002). 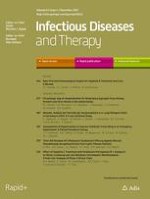 New Viral and Immunological Targets for Hepatitis B Treatment and Cure: A Review

Assessments of Opportunities to Improve Antibiotic Prescribing in an Emergency Department: A Period Prevalence Survey

Interventions Targeting the Prescribing and Monitoring of Vancomycin for Hospitalized Patients: A Systematic Review Protocol