Cancer is responsible for about 51 million deaths yearly, out of which cervical cancer accounts for 8.5%, most of which occurred in the developing countries. About half a million new cases are seen worldwide each year, most occurring in developing countries [ 1]. Cancer of the cervix is the commonest genital tract malignancy in the female [ 2]. It has been ranked second to breast cancer in the reports of [ 3, 4]. Cervical cancer has positive association with infection of human papillomavirus (HPV), and repeated or persistent HPV infections appear to raise the chances of developing the disease [ 5].
The work of Muñoz et al. [ 6] has shown that tobacco smoking, high parity, long-term hormonal contraceptive use, co-infection with Chlamydia trachomatis, herpes simplex virus type 2, HIV, immunosuppression, certain dietary deficiencies, and genetic and immunological host factors are contributing factors to cervical cancers.
Anzeige
The availability of effective prophylactic HPV vaccines gives new promise for a primary prevention strategy for HPV infection and cervical cancer [ 7]. However, the current vaccines only protect against 70% of the disease, and are only effective for those not yet exposed to the virus.
Cervical cancer incidence and mortality have declined substantially in western countries following the introduction of screening programmes. Screening programmes in Africa are however often rudimentary or nonexistent. The screening techniques often used are Pap smear test [ 8], visual inspection of the acetic acid-painted cervix (VIA) [ 9], cryotherapy for moderate cervical dysplasia [ 9] and HPV DNA test [ 10].
The earlier reports of [ 11– 13] have respectively shown that less than 10% of the women in Maiduguri are aware of cervical cancer and its symptoms, inadequate knowledge of aetiology and prevention of cervical cancer among nurses in Ibadan, and 52.8% awareness of cervical cancer screening methods among women in Owerri.
Lack of knowledge of cancer screening exercise may be a reflection of general poor health education in the country. Therefore, comprehensive health education programmes are more likely to be beneficial than disease-specific programmes in tackling this problem.
Anzeige
The present study intends to investigate the knowledge, attitude and practice of nurses in Lagos University Teaching Hospital towards cervical cancer screening as they are important health personnel that are suppose to educate women on the need for cervical cancer screening.

Description of the Study Area

Lagos University Teaching Hospital is one of the largest teaching hospitals in Nigeria. It is located in Lagos State which is a state in southwestern Nigeria. Lagos is one of Nigeria's most populated states. It is the chief port, principal economic and cultural centre. The teaching hospital has 761 bed spaces and records over 9,000 (≈10,000) patient attendances in a month. There are about 641 nurses working in Lagos University Teaching Hospital (LUTH) in all departments.

This study is a descriptive cross-sectional survey of cervical cancer screening amongst 200 nurses in Lagos University Teaching Hospital, Lagos, Nigeria.

A sample size of approximately 200 was calculated using Fischer formula. The sample size was increased to 250 in order to give allowance for nonresponse. However, 200 questionnaires were retrieved after the study.

A systematic random sampling technique was employed to select one out of every three nurses in the different wards, theatres and clinics.

Data were collected using a standard closed-ended structured questionnaire adopted from WHO with three sections on sociodemography, knowledge on cervical cancer and attitude towards cervical cancer screening. The subjects were mainly not required to write but just to tick the appropriate boxes which were provided for each option given. Names were not used for identification, but coding numbers were used instead.

The 200 questionnaires obtained from the study were analysed using the EPI-INFO 2002 software programme. The data were presented in frequency distribution tables with percentages, and chi-square analysis was used to test the significance at p < 0.05.
Anzeige

At every stage in life, a woman in the third world risks some serious health problems. These include HIV/AIDS, high maternal mortality rates, and cancer of the cervix later in life. Cancer of the cervix is a preventable disease, and a key aspect of its prevention is the detection of the premalignant form by cervical screening [ 13]
Anzeige
This present study has shown that nurses are aware of cervical cancer (99%) which is consistent with the earlier study of [ 13]. It also corroborates the reports of [ 14] that showed a good association between level of education and cervical cancer awareness. The major sources of information about cervical screening as revealed in this study were through electronic media and health professionals. But it is a thing of concern that information about cervical cancer is poorly disseminated in churches and mosque (7.6%). It may be important that churches and mosques begin to have a forum to discuss health issues as information obtained from these spiritual institutions are usually taken serious.
Though the respondents have good knowledge of the causes and signs of cervical cancer, a few proportions (18.5%) felt that excess intake of alcohol could cause the disease. The respondents are quiet aware of Pap smear (91%) as one of the screening techniques of cervical cancer and have good attitudes (89%) towards Pap smear, but most of them have never done it before. The extremely low percentage (12%) of the respondents above 50 years who have done Pap smear is consistent with the studies of [ 14, 15] that showed a good correlation between old age and low Pap smear testing. Quite sizable percentage (18.5%) of the respondent thought that Pap smear is used to prevent cervical cancer and that Pap smear should be done once in a lifetime. The study further revealed a majority of the respondents not to know colposcopy as one of the screening techniques for cervical cancer. These wrong opinions may necessitate institutional-based workshop and training on cervical cancer and other diseases so as to give people good knowledge of the disease.
Table 7
Associations between sociodemographic variables and uptake of Pap smear
The findings from this study showed that some respondents (17%) did not do Pap smear because it is costly. This observation is consistent with the work of [ 16] that showed that socioeconomic status played important role in the demand for cervical cancer screening. Women should be on health insurance programmes so as to encourage them to regularly undergo this examination as earlier recommended by [ 17]. This present study further revealed that there are significant associations ( p ≤ 0.05) between age of respondents, marital status, and awareness and uptake of cervical cancer screening. This assertion may be justified by the fact that married people of reproductive age are more susceptible to cervical cancer than older married people who have passed the reproductive age.
Finally, it has been made known from this study that nurses have good knowledge of cervical cancer but have limited understanding of the types of cervical cancer screening techniques and poor disposition towards undergoing cervical cancer screening. It may thus be recommended that institutions should periodically organise seminars and training for health personnel especially the nurses which form a group of professionals that can give health education to women about cervical cancer. This training may be done as part of the orientation programme to newly employed staff. Moreover, hospital-based pro-screening campaign is highly advocated so as to enhance prevention of cervical cancer. 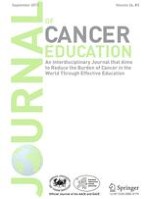 When your Best is not Good Enough

Teaching Oncology to Medical Students is a Must: The Egyptian NCI Step on the Road