Randomized trials were sought in the Cochrane Controlled Trials Register, Medline, EMBASE and the trials registry sites clinicaltrials.gov and who/int/ictrp/search/en. Abstracts were screened, full-text studies chosen, and finally eligible studies selected and abstracted. The review was then divided into those studies that compared two or more surgical procedures and those that had at least one arm that was non-surgical. Studies were further categorized by the specific interventions and comparisons. The outcome assessed was treatment failure. Negative effects of treatment assessed were headache and anal incontinence. Risk of bias was assessed for each study, and the strength of the evidence of each comparison was assessed using the Grading of Recommendations, Assessment, Development and Evaluations (GRADE) approach.

One hundred and forty-eight eligible trials were found and assessed, 31 in the surgical group and 117 in the non-surgical group. There were 14 different operations described in the surgical group and 29 different non-surgical treatments in the non-surgical group along with partial lateral internal sphincterotomy (LIS). There were 61 different comparisons. Of these, 47 were reported in 2 or fewer studies, usually with quite small patient samples. The largest single comparison was glyceryl trinitrate (GTN) versus control with 19 studies. GTN was more effective than control in sustained cure (OR 0.68; 95% CI 0.63–0.77), but the quality of evidence was very poor because of severe heterogeneity, and risk of bias due to inadequate clinical follow-up. The only comparison to have a GRADE quality of evidence of high was a subgroup analysis of LIS versus any medical therapy (OR 0.12; CI 0.07–0.21). Most of the other studies were downgraded in GRADE due to imprecision. 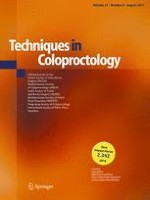 The Delorme technique in colostomy prolapse