Millions of patients worldwide suffer disability and death due to complications related to surgery. Many of these complications can be reduced by the use of the World Health Organization (WHO) Surgical Safety Checklist (SSC), a simple tool that can enhance teamwork and communication and improve patient safety. Despite the evidence on benefits of its use, introducing and sustaining the use of the checklist are challenging. We present a team-based approach employed in a low-resource setting in Tanzania, which resulted in high checklist utilization and compliance rates.

We reviewed reported data from facility registers supplemented by direct observation data by mentors to evaluate the use of the WHO SSC across 40 health facilities in two regions of Tanzania between January and December 2018. We analyzed the self-reported monthly data on total number of major surgeries performed and proportion of surgeries where the checklist was used. We also analyzed the use of the SSC during direct observation by external mentors and completion rates of the SSC in a random selection of patient files during two mentorship visits between June and December 2018.

During the review period, the average self-reported checklist utilization rate was 79.3% (11,564 out of 14,580 major surgeries). SSC utilization increased from 0% at baseline in January 2018 to 98% in December 2018. The proportion of checklists that were completely and correctly filled out increased between the two mentor visits from 82.1 to 92.8%, but the gain was significantly greater at health centers than at hospitals (p < 0.05). Health centers (which had one or two surgical teams) self-reported a higher checklist utilization rate than hospitals (which had multiple surgical teams), i.e., 99.4% vs 68.8% (p < 0.05).

Our findings suggest that Surgical Safety Checklist implementation is feasible even in lower-resource settings. The self-reported SSC utilization rate is higher than reported in other similar settings. We attribute this finding to the team-based approach employed and the ongoing regular mentorship. We recommend use of this approach to scale-up checklist use in other regions in the country as recommended in the Ministry of Health of Tanzania’s National Surgical, Obstetric, and Anesthesia Plan (NSOAP). 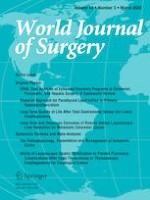 Development of a Visual Analytics Tool for Polytrauma Patients: Proof of Concept for a New Assessment Tool Using a Multiple Layer Sankey Diagram in a Single-Center Database