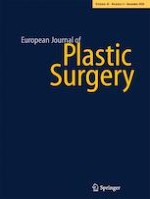 Reply to “Commentary on Perinipple Mammaplasty” by Dr. Bishara Atiyeh

The arrow tip technique for bilateral hanging ala: a 3-year review

The use of electrochemotherapy (ECT) in the management of malignant melanoma in the clinically frail patient: a case report