Emergency point-of-care ultrasound (POC u/s) is an example of a health information technology that improves patient care and time to correct diagnosis. POC u/s examinations should be documented, as they comprise an integral component of physician decision making. Incomplete documentation prevents coding, billing and physician group compensation for ultrasound-guided procedures and patient care. We aimed to assess the effect of directed education and personal feedback through a task force driven initiative to increase the number of POC u/s examinations documented and transferred to medical coders by emergency medicine physicians.

Three months before a chosen go-live date, departmental leadership, the ultrasound division, and residents formed a task force. Barriers to documentation were identified through brain storming and email solicitation. The total number and application-specific POC u/s examinations performed and transferred to the healthcare record and medical coders were compared for the pre- and post-task force intervention periods. Chi square analysis was used to determine the difference between the number of POC u/s examinations reported before and after the intervention.

A total of 1652 POC u/s examinations were reported during the study period. Successful reporting to the patient care chart and medical coders increased from 41 % pre-task force intervention to 63 % post-intervention (p value 0.000). The number of scans performed during the 3-month periods (pre-intervetion, post-intervention 0–3 months, post-intervention 3–6 months) was similar (521, 594 and 537). When analyzed by specific application, the majority showed a statistically significant increase in the percentage of examinations reported, including those most critical for patient care decision making: (EFAST (41 vs. 64 %), vascular access (26 vs. 61 %), and cardiac (43 vs. 72 %); and those most commonly performed: biliary (44 vs. 61 %) and pelvic (60 vs. 66 %). Of the POC u/s studies coded and reported for reimbursement, 15.9 % were billed before intervention and 32 % were billed after intervention (p value: 0.000). 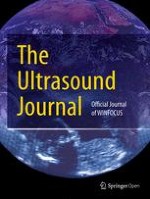 Teaching the internist to see: effectiveness of a 1-day workshop in bedside ultrasound for internal medicine residents

Doppler images of intra-pulmonary shunt within atelectasis in anesthetized children

Diagnostic accuracy of lung ultrasonography combined with procalcitonin for the diagnosis of pneumonia: a pilot study