Literature regarding callosal injury after hypoxic-ischemic injury (HII) is scant.

To present the MRI and US findings of callosal injury after HII.

MRI and US studies of 76 neonates were evaluated for HII and 53 were considered positive.

Callosal injuries are common after HII. DWI is effective in confirming these injuries and easily demonstrates injury if performed prior to 1 week of age. The restricted diffusion demonstrated after this time could be attributed to continued injury. US is not a sensitive modality for callosal injury detection; however, abnormally increased callosal echogenicity might be a specific marker of injury in this setting. 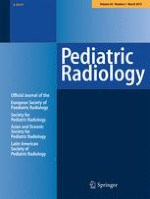 VCUG and the recurring question of sedation: preparation and catheterization technique are the key

Sedation and the VCUG