Constipation, soiling, and incontinence are common problems after definitive repair of anorectal malformations (ARMs) in children. We studied the expression of substance P (SP), vasoactive intestinal peptide (VIP), and c-kit in the rectum of murine embryos with or without ARMs at later developmental stages.

On the 9th embryonic day (E9), pregnant Institute of Cancer Research mice were fed etretinate, a synthetic vitamin A analogue (60 mg/kg), whereas controls were fed only with sesame oil. Embryos were excised between E14 and E18, and prepared for histological examination. The SP, VIP, and c-kit expressions were examined by immunohistochemical staining for the SP, VIP, and c-kit antigens, respectively.

At later developmental stages, the expression levels of SP, VIP, and c-kit reduced in the circular muscle layer of the rectum in mice with etretinate-induced ARMs. This result indicates that reduced SP, VIP, and c-kit expression levels in the circular muscle layer may cause severe constipation in children who develop severe ARMs after definitive surgery. 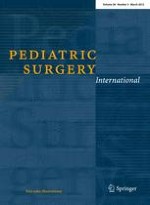