Formalin-fixed, paraffin-embedded skin tissue sections were collected from a matched cohort of 63 fibromyalgia syndrome (FMS) patients and 49 volunteers from the general population with both alpha1-antitrypsin (AAT) normal and deficiency variants. These tissues were examined for the expression of the broad-spectrum inhibitor AAT, the serine proteinases elastase and tryptase, the proinflammatory cytokines MCP-1 and TNFα, the endothelium biomarker VEGF, and the inflammation/nociception-related receptor PAR2. The most relevant finding of the study was a significantly increased number of mast cells (MCs) in the papillary dermis of all FMS patients (greater than or equal to five to 14 per microscopic high power field) compared to zero to one in controls (p < 0.001). MCs strongly stained with tryptase, AAT and PAR2 antibodies, exhibited a spindle-like shape and were uniformly distributed around blood vessels and appendages. MCP-1 and VEGF expressed weak/moderate positivity in most samples, with a higher expression in controls than in FMS patients (p < 0.001 and 0.051, respectively). No differences in elastase and TNFα were found between both groups. Moreover, no histological differences were found between samples from AAT deficiency and normal AAT phenotypes. Our results indicate that FMS is a MC-associated condition. MCs are present in skin and mucosal surfaces throughout the human body, and are easily stimulated by a number of physical, psychological, and chemical triggers to degranulate, releasing several proinflammatory products which are able to generate nervous peripheral stimuli causing CNS hypersensitivity, local, and systemic symptoms. Our findings open new avenues of research on FMS mechanisms and will benefit the diagnosis of patients and the development of therapeutics. 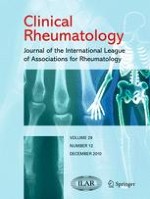 The effect of additional therapeutic ultrasound in patients with primary hip osteoarthritis: a randomized placebo-controlled study

Correlations between coping styles and symptom expectation for rheumatoid arthritis