We used the framework of the Monte Carlo method to create 3200 virtual experimental data sets of activity concentrations (kBq/g) to get the statistical information. Time activity concentration curves were produced using the fitting method of a genetic algorithm. The basic method was that absorbed doses of 211At-MABG were calculated based on the medical internal radiation dose formalism with the conversion of the physical half-life time of 131I to that of 211At. We have further improved the basic method; that is, a novel dose conversion method, RAP (Ratio of Pharmacokinetics), using percent injected dose/g.

Virtual experiments showed that 211At-MABG and 131I-MIBG had similar properties of initial activity concentrations and biological components, but the basic method did not simulate the 211At-MABG dose. Simulated 211At-MABG doses from 131I-MIBG using the RAP method were in agreement with those from 211At-MABG, so that their boxes overlapped in the box plots. The RAP method showed applicability to the different cell lines, but it was difficult to predict long-term doses from short-term experimental data.

The present RAP dose conversion method could estimate 211At-MABG absorbed doses from the pharmacokinetics of 131I-MIBG with some limitations. The RAP method would be applicable to a large number of subjects for targeted nuclide therapy. 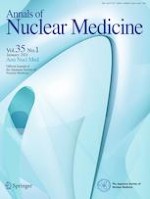